Adding to its repertoire of new features, Google Ads has begun offering a beta version of image extensions. Currently available only to select advertisers, this new extension displays a small image next to your text ad on the search engine results page (SERP).

What Are Image Extensions?

Image extensions are a new ad extension in Google Ads. The feature is still in beta and only available to select advertisers.

As shown in the example below, the image extension shows as a small photo next to your text ad on the SERP. The image compliments your ad messaging and brings a visual element to your ad.

Similar to Google’s other recent innovations like gallery ads, image extensions are eligible to show up exclusively on mobile devices.

Since they are a new feature, there is not yet a wealth of data available on the effectiveness of these extensions. However, because they help your ads stand out on the SERP, we expect image extensions will boost mobile clickthrough rate (CTR) and help drive more traffic to your site.

Furthermore, as Google has experimented with SERP layout changes recently, the format of these image extensions may be an indicator of what’s to come with organic search results.

Consumers have become used to online experiences that merge visual elements with text and information. Google has responded to this shift by developing visual SERP features, adding favicons to organic listings, and other tactics to incorporate visual content on the search results page.

Ads with image extensions could potentially mimic what organic listings look like in the future.

How Do I Create Image Extensions?

Update: Image extensions can now be added per campaign, whereas before they could only be implemented by ad group. This makes bulk uploads less cumbersome than before. 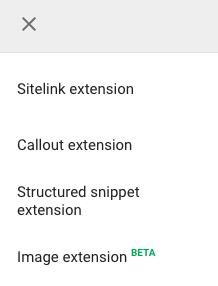 You can also add the image extensions to multiple campaigns or ad groups at once. The most efficient method for selecting multiple ad groups or campaigns is as follows:

Once you’ve selected all the ad groups or campaigns you want to include, you’ll need to upload your images. Click the blue plus button in the Images box, go to the Upload tab, and choose the file(s) you want to display next to your ad.

If you don’t have image files ready to upload, you can enter your website’s URL and Google will scan your site for images that meet their requirements.

Like other ad extensions, your image extensions will have to be approved by Google once they’re saved. After they’re approved, the images will begin to show up next to your ads on the mobile SERP.

What Are The Image Requirements?

When Google first released image extensions, photos had to be in square format. However, you can now upload both square and landscape images.

When Will They Be Available To All Advertisers?

It’s unclear when Google plans to make image extensions available to all advertisers. We may learn more about their vision for this ad extension during this year’s Google Marketing Live, scheduled for June 2020.

However, until we hear more, advertisers should check in on their account regularly to see if image extensions have become available.

Need help optimizing your Google Ads account? Browse our PPC Management Services and see how Creative Website Marketing can help your business get the most out of Google Ads. You can also request a proposal today.